Our friend Hollis has a new album 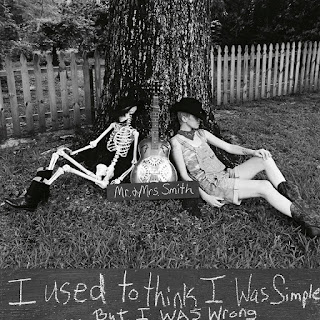 If you're a regular reader of this blog, you know that musician Hollis Smith has a personal connection with us. She flew here from Florida to play a benefit concert for us earlier this year, and her song "Even Angels Bite The Dust" was my first musical selection for our soundtrack.
Hollis, also known as "Mr. and Mrs. Smith," just came out with a new album, and you can check it out here. I encourage you to give it a listen, especially if you're into Southern folk. At least, I think that's how you would describe her sound. The album is called "I Used To Thing I Was Simple, But I Was Wrong," and it's a little more upbeat than the dark, gritty sound I was used to from her.
Soon Hollis will begin to promote the album with a southeast tour of Atlanta, Asheville and Wilmington. 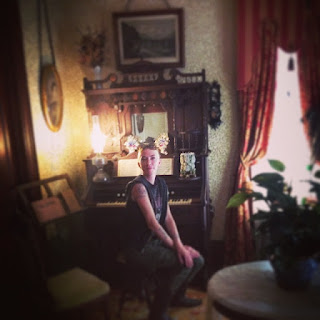 Hollis even gave me a sneak peek of her album cover a couple weeks ago. (That's her and her partner "Skinny" above. I'll let you figure out which one is which.)
I told Hollis she should use the picture of the left. I may be biased, though, since I'm the one who took it. The day after her concert here, I had lunch with Hollis and her friend who had driven in from Denver. Since neither of them had been to Wichita before, we decided to go to Cowtown. This room was one of the exhibits, and it was roped off to visitors.
I dared Hollis to jump over the rope and go in anyway. And if you know anything about Hollis, she cannot resist a good dare.
However, she refused to consider the picture for an album cover because Skinny wasn't in it. Women.
Posted by Unknown at 1:48 PM