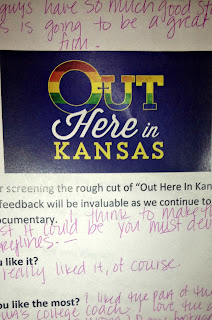 As I mentioned on my last post, we had a small private screening of the rough cut of "Out Here In Kansas" Saturday night at in Andover. If you weren't invited, please don't be offended - it only means we don't want you to see it until it's great.
We're a little ways from a finished product. What we showed Saturday is still pretty much a blueprint. It's got placeholders, sections of black screen and me stumbling over my lines for some of the narration.
The conference room of Scooter's Coffeehouse was pretty crowded with the viewers we hand-picked, which included local filmmakers Lester Rowe and Nick Brown.
And what did we get out of it? Tons. When Kenny and I met Sunday afternoon, we were both feeling overwhelmed. Most of the feedback helped us realize what we need more and less of, and what needed re-arranged (which is harder than it sounds). Lester and Nick stuck around afterwards and talked technical stuff with us.
The best news? Our story makes sense to those who knew nothing about it going in. After editing 30 hours of film down to 35 minutes, Kenny and I were too close to the trees to see the forest.

Posted by Unknown at 7:33 AM No comments: 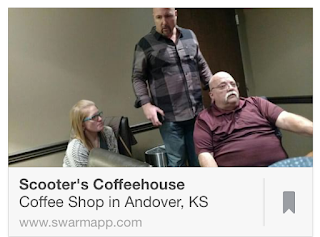 Jon, Kenny and I showed our rough cut to a few friends tonight, looking for some brutally honest feedback ... which we certainly got.
This photo was taken by Jon (and uploaded to an app I've never heard of), and it makes me smile because of the man on the right. Tim Johanson is a former teacher and coach in Andover, and was the only viewer who had any connection to Burt.
Tonight, he shared this story of an non-athletic (but well-spoken) Burt in seventh grade ...
"Mr. Johanson," Burt told him, "I believe next year I'll try my endeavors in football."

Our editor Kenny Linn (pictured on the left) is a broadcast and video production teacher. When one of his students wanted to interview a filmmaker for a school project, Kenny suggested me.
Here are his questions and my answers, some of which really forced me to think and reflect on why I'm doing this. I hope you enjoy it as much as I did.

How long in this occupation?
I’ve been a professional journalist for about 25 years, but only started my first film 18 months ago. To pay the bills, I work at a radio station and co-host a sports talk show every afternoon.

How did you choose your occupation? 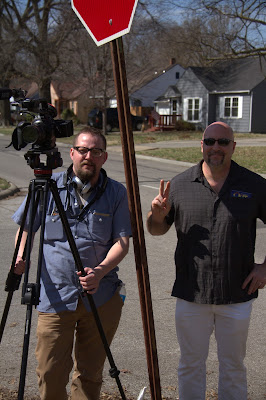 I had a lot of confidence in my writing ability, I knew a lot about sports, and I thought working for a newspaper sounded like just about the coolest job ever. I had been in college for a year and switched my major from music to journalism.

Financially, does it let you live the way you prefer?
Pretty much, although my teenage children would vehemently disagree at the moment.

If not, why not and what can you do about it?
Write a Hollywood blockbuster, of course! But if that never happens, I really don’t have many regrets as far as making money, other than wanting my kids and me to see more of the world. (Although they’ve seen more than most teenagers, the ungrateful rascals.)

What rewards have you experienced because of your career?
There have been many. I’ve had the opportunity to interview some of the famous people in the world. My job as a journalist has taken me to awesome places like New York City and the Virgin Islands. But the biggest reward is – every once in a while – my work will invoke laughter, tears and truth. And I know that’s what my first film is going to do, too.

What sacrifices have had to make for your career?
All kidding aside, it’s been pretty rough financially these last 18 months. I have put an awful lot of time and money into this project, and I know my kids are going to be relieved when it’s finally finished. But never for a second have I thought about stopping. It’s too important of a project. People have stepped up to help me so much (nobody more than Mr. Linn). And every day of working on this film has been so rewarding.

What kind of commitment does this career take in terms of: Education? Energy/endurance? Stick-to-itiveness?
I am pretty self-taught, as far as writing screenplays (and of course I’ve watched a ton of movies). But I can’t imagine how valuable it would be to have a formal education in film like Mr. Linn. I have learned so much just from watching and listening to him, and the main thing I’ve learned is how little I know. True, Mr. Linn’s skills and instincts with film have been sharpened by years of experience, but it all started with a formal education. God really blessed this project when Mr. Linn came on board. With my degree and years of experience in journalism, we have made for a great team these last few months.
Energy is always a good thing, but stick-to-itiveness is way more important. I don’t know how many times we got distracted with this film because “life got in the way.” But it was never far from my mind, or Mr. Linn’s, and we kept after it when there were barriers such as lack of money, lack of time or people telling us “no.”

If you had it to do over again, would you choose this career? Why or why not?
Absolutely! I will always be a journalist at heart because it’s a noble and important profession, even if not everyone appreciates it. My only regret is not getting into filmmaking earlier. I adore film and - even with everything I’ve done as a professional journalist - this is no doubt the most important project of my life.
Posted by Unknown at 12:05 PM No comments: 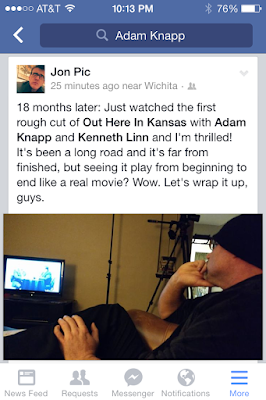 Kenny and I decided to have a small screening of the movie tonight. When I say "small" I mean one person: Our old friend Jon Pic, who started helping me on the project from day one.

Posted by Unknown at 8:30 PM No comments: 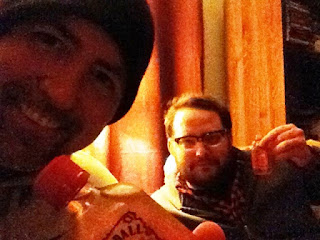 I talked Kenny into going to see "The Hateful Eight" with me Friday night, and I've pretty much been editing film at his house ever since.
But look at us now. Just a few minutes ago, we managed to complete a story timeline that fits 30 hours of footage into 35 minutes.
"Wait a minute," you're saying if you're a reader of this blog. "Didn't Kenny say our goal should be 30 minutes?"
"I can edit five minutes in my sleep," he says.
Kenny was so happy he insisted on running to the liquor store so we could toast with these miniature bottles of Fireball (which my friends and I should have credit for inventing back when I was in college, but that's a story for another day).
Mind you, we're still a little ways from being done with this, with work and a probably a couple of favors we still haven't called in. But if there's one thing I've learned about filmmaking, you have to celebrate the milestones.

A peek at our script 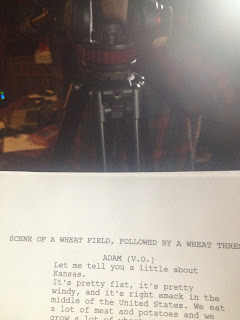 Here's a little shot I took tonight, going over the screenplay while waiting for Kenny to set up the camera tonight.
The footage he shot of me in his home isn't actually going to be in the movie - we're saving that for the inside of a barn. But he needed me to read it on camera anyway, to use that for a placeholder as we continue to edit away.
Posted by Unknown at 10:18 PM No comments: 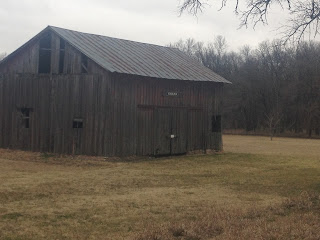 This barn in beautiful Greenwood County has been in our family since before I was born. It's a neat old barn, but I can never remember it actually being used.
Well, our editor Kenny wants to use it in post production for our documentary. Once he showed me what he was talking about, it was clearly a cool idea.
You'll only see the inside of the barn when you watch "Out Here In Kansas," so here is a picture of the outside. Actually, when you see the inside, you may not even realize it's a barn.
Posted by Unknown at 9:32 AM 2 comments:

'Looking sideways at someone' 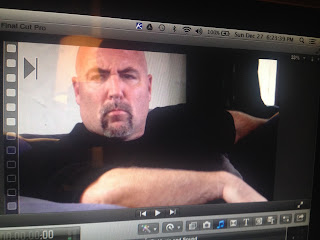 I'm pretty sure that's what I'm doing - both literally and figuratively - in the last real conservation I had with Burt Humburg, subject of Out Here In Kansas.
What was Burt saying at the time? I haven't a clue. I just thought it was a funny picture.

Posted by Unknown at 7:02 PM No comments: