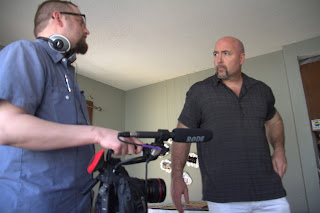 Our official trailer will debut at the Tallgrass Film Festival, which is Oct. 14-18 in Wichita.
This is not to be confused with the videos our editor Kenny put together to promote the film earlier this year. This is the preview in which we try to give people an idea of “Out Here In Kansas” in 90 seconds or less.


There are many ways we could do that, but I don’t think any are better than what Kenny and I agreed on this week. I wrote it, but that didn’t take much. The ideas he brought and the work he’s put into it are what make it really pop. You’ll know what I mean when you see it. Kenny somehow managed to make it gritty and beautiful at the same time. Which is so Kenny.
Posted by Unknown at 3:32 PM