A quick word about Westboro

Some of you may think that Westboro Baptist, a little church in Topeka, Kan., that has gained worldwide notoriety for its anti-gay protests, is going to be a significant part of our movie.
It’s not.
First of all, there’s already a documentary about Westboro and its founder, Fred Phelps. It’s called “Fall From Grace” and it was well done by writer and producer K. Ryan Jones, who was a student at the University of Kansas at the time.
Secondly, Westboro is just not a big part of the story I’m trying to tell. 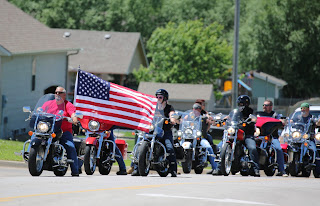 I mean, don’t get me wrong. The people at Westboro are going to hate this movie. Then again, they also claim to hate the United States of America and the soldiers that protect it.
Just watch “Fall From Grace” and tell me it doesn’t send a little shiver down your shine, particularly when Jones interviews the children from the church.

I’ve had a couple of little brushes with Westboro the last couple of years, the most fun of which was playing Fred Phelps’ gay guardian angel in Wichita Gridiron. And one of them started following me on Twitter. But when we spent the afternoon documenting a celebration at the gay-friendly Equality House, which is right across the street from Westboro, nobody heard a peep out of them.
Westboro was actually in Butler County earlier this year, protesting the graduation of El Dorado High School, for some reason. This photo is from that day. It’s a motorcycle group that does its best to shield people from Westboro’s nonsense.
The bikers call themselves the “Guardian Angels,” and they’re interviewed in Jones’ documentary. I encourage you to check it out.
Posted by Unknown at 2:37 PM