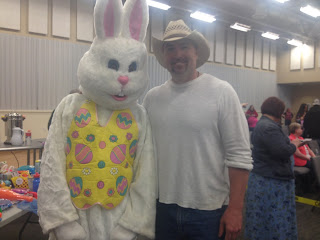 Here's a picture of me with the Easter Bunny, proving I made it to church this morning. It's the first photo taken of my new hat, which our friend Hollis Smith talked me into buying at Hatman Jack's.
The rest of my day will be spend eating dinner with my family at mom and dad's ... followed by watching more VHS tapes of the 1997 Southwestern College football team with my extremely patient editor, Kenny.
Posted by Unknown at 10:15 AM No comments:

That's how much football tape Kenny and I have watched so far of the 1997 Southwestern Moundbuilders season. More to come this weekend.
Posted by Unknown at 7:52 AM No comments:

Back to the game film 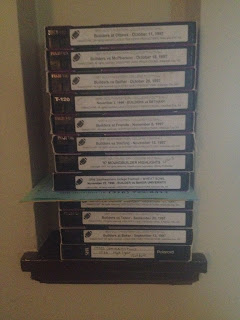 One of the cooler aspects of "Out Here In Kansas" will be a segment describing Burt's time as an All-American football player. But it's also proving to be the most challenging.
To start with, Burt was an offensive guard, which has got to be the hardest position in football from which to choose highlights.
There is one play in particular we're looking for, and we have yet to find it. But I know we will, That's because Kenny and I have secured all the game tapes from Burt's senior season at Southwesteren College (and a VHS player on which to watch them). So far we've seen every second of five games, which means we're almost halfway finished. 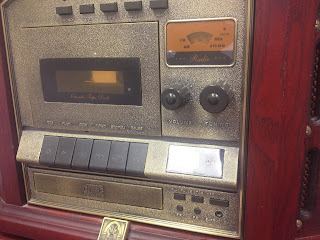 Actually, his birth name is Paul Harvey Aurandt II, and he is the son of the legendary radio broadcaster Paul Harvey. For reasons that are important to the film, I need to speak to the son, who is a legend in the radio business himself.
If anyone out there has a connection, I would be grateful for any help. As a longtime journalist, I'm used to tracking people down, but I continue to hit dead ends.
My email address is adamduaneknapp@gmail.com, and thanks for reading our blog. 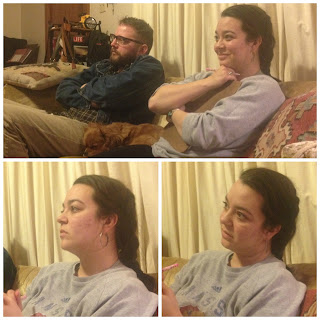 This week we got a new pair of eyes and ears on "Out Here In Kansas" - those of Maria Elena, who has been a friend of the project for about a year.
You might remember me writing about Maria Elena when she played our benefit concert back in April, She's agreed to score the movie as we continue to edit our way toward a final product.
Posted by Unknown at 12:58 PM No comments: