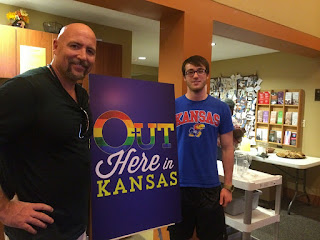 My son Dallas is a sophomore at the University of Kansas. He studies hard, he has a part-time job and he's even in a fraternity. He's been understandably busy when I've tried to get him to watch "Out Here In Kansas."
"Just email it to me," he told me,
"No, man," I replied. "You have to come to a screening."
It finally happened Saturday. I drove up to Naismith Hall, hung out in his dorm and took him to the Salty Iguana before that night's screening in Topeka.
That was at the Unitarian Universalist Fellowship of Topeka, in an event sponsored by UUFT Justice and the Beacon Youth. It was fun seeing so familiar faces from last year's shoot at the Equality House. It was fun meeting UUFT Minister Sarah G. Oglesby-Dunegan, who is now probably on my five top list of people I'd like to share a beer with.
And it was fun visiting with people like Kansas author Annette Billings, my cousin Beth and Julie Buzbee, my former co-worker at the St. Joseph (Mo.) News-Press, who was kind enough to take the picture you're looking at right now.
Posted by Unknown at 11:07 AM No comments:

Our next five Kansas screenings 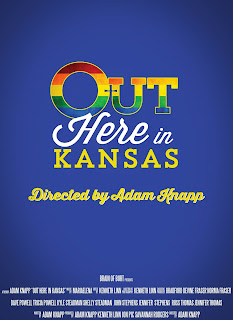 When we travel to the Lid-Off Film Festival on Saturday, it will start a stretch in which we screen "Out Here In Kansas" five times in three weeks. All are in Kansas, all are open to the public, and I plan on being there for them.
Here's the list.

Posted by Unknown at 1:03 PM No comments:

You asked for it - an encore

Due to popular demand, we will be again be screening "Out Here In Kansas" at Roxy's Downtown, this time on a Saturday night.
Mark your calendar for Sat., Nov. 5. The doors open at 6 and the half-hour documentary will start at 7 p.m. at Roxy's, which is located at 412 1/2 E. Douglas.
Because we unexpectedly sold out the premiere, and unfortunately had to turn people away at the door, we're doing things a little different this time. Tickets may be purchased in advance by calling (316) 265-4400. (Reservations can also be made by emailing admin@roxysdowntown.com, but calling is recommended.)
Advance tickets at $5, but they'll be $8 at the door. You can find out Facebook event here.
As always, food and drinks will be available at Roxy's. The folks there are being awfully good to us, so I'd encourage you to come early and enjoy yourself at a first-class venue.
Posted by Unknown at 12:18 PM No comments:

I wanted to share this message we received from a woman who attended the world premiere of "Out Here In Kansas" last week.

Last night you were the person that reached to a struggling young man. He recently came out about his sexuality.
As a mother, I thought we should attend this film release. I'm sure you will remember him. He was the quiet, nervous Pokémon go player seating off to the side.
He was active in the church but when he came out he felt he had to leave and never return.
Thank you for your work and for shining a light on my son's hard road ahead. 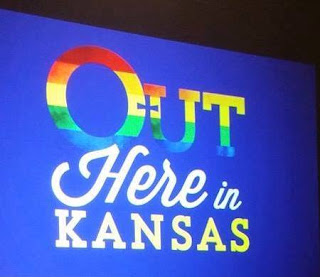 That was used with permission from the mother, and it puts a serious lump in my throat. Stories like this are exactly why I set out to make "Out Here In Kansas." If you've seen the movie and would like to share yours with me, I would be eternally grateful. (And I promise to respond to each one of them.) You may email them to adamduaneknapp@gmail.com.

And if you haven't seen the movie, we have at least four more Kansas screenings coming up over the next 24 days. Maybe five - we're hearing from a lot of folks asking for an encore screening at Roxy's Downtown.

Best night of my life 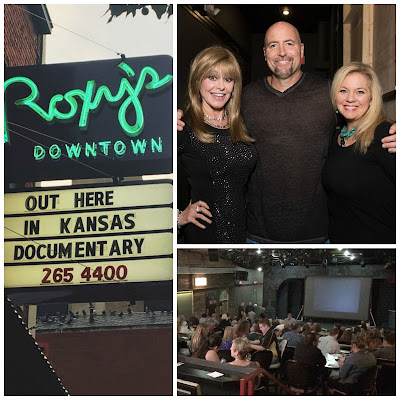 I've been having trouble describing how electric our world premiere in downtown Wichita was earlier this week, but I think my filmmaking buddy Lester Rowe summed it up best.
"So let's recap," he said. "You had two mayors, a bunch of filmmakers, Miss Missouri and not an empty seat in the house, Only a select few get to experience that. You took an article, turned it into an idea, went on a first time filmmaking journey and had a moment."
As I told the crowd afterward, I think it was the best night of my life.
The emcee was the aforementioned Miss Missouri, Sierra Scott, who happens to be the best friend of marketing guru Christine Bitner, who helped organize the event. 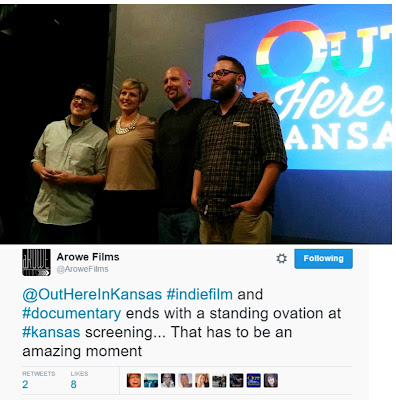 Wichita mayor Jeff Longwell was in attendance with his wife Susie and 10 of my castmates from Wichita Gridiron, Mulvane mayor Shelly Steadman and her husband Kyle, who are executive producers for the film, were there as well. So were executive producers Dave and Trish Powell. Former teachers. College classmates. Best friends. Doctors. Lawyers. Politicians. Pastors. Journalists.
Musician MariaElena, who scored the movie, was there, as was artist Ram Hull, who animated it. I should really stop trying to name people at this point, but I do owe a big thank-you to my friend Brendan O' Bryhim, who came up with the idea of this event in the first place.
We drew a standing-room-only crowd on a Tuesday night in Wichita. One marketing professional said that was nothing short of miraculous. VIP Wichita Magazine, Splurge! and the Tallgrass Film Festival all had photographers there. It was a first-class event at a first-class venue, Roxy's Downtown. We even got this review from the Wichita State University Sunflower.
But none of those things were the most satisfying part.
When the lights dimmed and the movie began, Christine and I settled in at the very back of the room and paid attention to the audience. They laughed in the exact moments we expected them to. They cheered in other moments when we didn't expect them to. Some cried at the end. They hung on every word. Many didn't want it to end. It was the stuff filmmakers dream about. They really got what I've been trying to do.
So what now? Well, we have four more screenings in Kansas over the next month, and there's been a lot of inquiries about an encore screening at Roxy's. So stay tuned for an update on that.

We have a new trailer

Kenny and I put this trailer together this week. It's not as heavy as the one we put together last year. If you recognize the distinctive singing voice, it belongs to our old friend Hollis Smith, who performs under the stage name Mr. and Mrs. Smith.

If you live in the Topeka or Lawrence area, I'd like to invite you to an Oct. 29 screening of "Out Here In Kansas" at the Unitarian Universalist Fellowship.
The event is on a Saturday and begins at 7 p.m. Following the half-hour documentary, I'll be on hand for a question and answer session.
You can learn more about the event here.