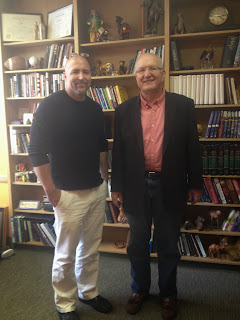 I've never been to College Hill United Methodist, but I've been told I needed to meet its pastor. So yesterday, I did just that.
Kent Little was a delightful man to talk to, he's on board with what we're doing with "Out Here In Kansas," and he even offered to help us in any way he could.
This is important. You may recall a couple years ago, it was at College Hill United Methodist that gay Christian advocate Matthew Vines chose to premiere a coming-out YouTube video that people have been talking about ever since. College Hill United Methodist has many gay members and is definitely one of the churches that has earned a reputation as welcoming the LGBTQ community.
At one point, I flat-out asked Pastor Kent if he believed being gay was a sin. He said he didn't. I was talking about that with my daughter (who took this picture) on the way home, because we were both waiting for a "but." It never came.
Posted by Unknown at 12:33 PM