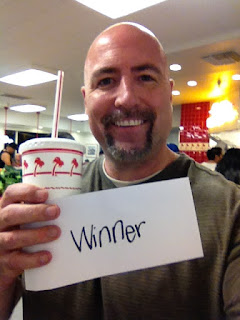 Another fortuitous start to my morning.
I was the last one to walk into the first of many screenwriting classes they offer at this festival. Before I could sit down, the instructor asked me to pick a number between 1 and 15. I chose 14, and the rest of the class groaned as he announced I was the winner of a new watch.
(Which is kind of funny, because I actually flew out here on an airline ticket I won in a similar contest a few months ago. A ticket that expires on Monday, by the way.)
Anyway, I spent the entire day inside the hotel, going from one class to another. Some of them were focused on the craft of screenwriting. Some were focused on how to better network in the movie business. Many of them were focused on being prepared for tomorrow's "PitchFest," which is the main reason most of us are here.
To be sure, Sunday is going to be crazy. There are a lot of Hollywood executives and agents here to listen to pitches, and there are 500 of us. Naturally, a lot of people are nervous.
But I'm not. Because I've got nothing to lose. Since I've been here, I've already made many people from across the county, and a couple overseas, aware of "Out Here In Kansas." It's going to be made - and worst case scenario, we're going to have an excellent independent documentary that invokes discussion about an important social topic. 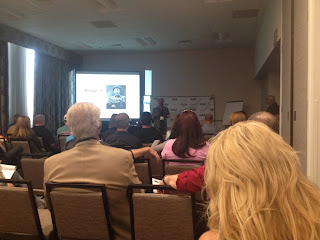 The night wrapped up with a party on the hotel patio, followed by a trip to In-And-Out. I can't believe how many fellow screenwriters I've become friends with since I arrived here. Probably more than a dozen. This afternoon I met a guy named Erik Harshman, and if you saw us side by side you would think we had nothing in common. But we're both from the Midwest (he's a St. Louis native), we both teach college remedial English (he teaches high school as well) and we both think the original "Robocop" is one of the most underrated works of genius ever made (and think last year's remake was a crime against humanity).
Posted by Unknown at 11:46 PM