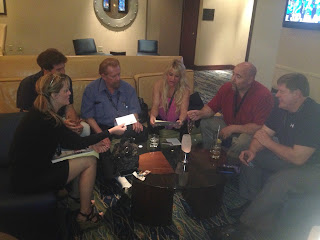 It's been an eventful trip so far, and the fun started before I even left Wichita.
In the wee hours at the airport this morning I ran into former Congressman Todd Tiahrt, a man I've gotten to know just a little bit over the years through various events and mutual friends. My timing was great: He was behind me in line at Great American Bagel and picked up my tab.
He was on his way to D.C. and asked why I was going to Los Angeles. Of course I told him about "Out Here In Kansas," which is a film that centers around the topic of gays, Christians and their relationship with each other.
Tiahrt, in case you didn't know, is a conservative Republican whose stance against gay rights is well documented. (And in case I didn't know, he reminded me.) But he wished me luck and said he hoped to see it soon. At least, I think that's what he said. It was awfully early. 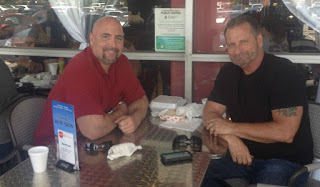 The first thing I did when I arrived in Burbank was meet up with my new friend Paul Thomas Arnold for lunch. Paul is an LA native who has been acting most of his life, not including the several years he took off to serve in the military. Amazingly, he returned to acting immediately afterwards and finds plenty of work between stage and screen. I have to admit, I took a sudden interest in Paul when I discovered he'd been on the Adult Swim cult favorite "Eagleheart." I started following him on Twitter and ... well, a year later here we are. He's a funny guy, a great storyteller, and less menacing than he looks. Believe me when I tell you, he's a Hollywood actor you should admire.
Tonight, there was a great social event in which we got to discuss ideas with several other screenwriters. Off the top of my head, the ones I met were from LA, Sacramento, San Francisco, Washington, Connecticut, Texas, Iowa, Michigan and Alberta, Canada. I know I'm forgetting a couple, but it's been a long day. Actually, I just realized I've been up for 23 hours. More tomorrow.
Posted by Unknown at 11:44 PM