Unlike the previous two days, this morning was not good.
I got up plenty early. A couple hours later I was supposed to meet two of my new screenwriting friends for a real Hollywood style breakfast. (You guessed it: Denny's). 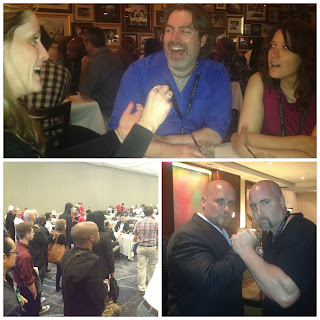 But I started to realize I hadn't truly researched the people who were going to be asking me questions at this morning's PitchFest. At least, not the way I would have as a journalist. I guess you could say I was gripping a little bit.

* gripping *
(verb) To choke or lose control; lose your grip on an object or situation; scared.
When LeBron got to the free throw line with the game hanging by a thread, he was gripping and shot a brick. 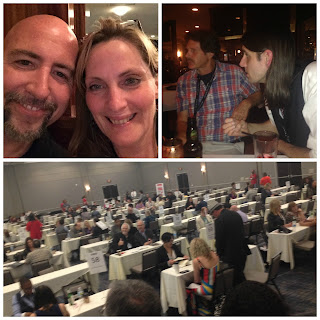 So I called them up and told them I wasn't going to make it to Denny's. "I am not prepared," I said. And man, did I mean it. I did my best to map out what I was about to get into. But what did that mean? I'd never done this before (or known anyone who had).
Furthermore, I had to be smart about my strategy and not waste time. Not every project is for everyone, no matter how good it is. Most executives were there to hear about unproduced screenplays. I could certainly talk about the ones I've written, but what I really wanted to do was go to bat for our little documentary.
Then the event started and ... what can I say? When the lights come on, I'm ready to play.
Three takeaways ...
1. Our name and our logo, both created by Jon Pic, took me a long way. In fact, I've got a hell of story to tell him when I get back.
2. If someone out here does know anything about Kansas politics, they probably learned it from The Daily Show.
3. "Out Here In Kansas" is an awesome idea for a documentary. Not that I had any doubt about that.