Once more at Roxy's 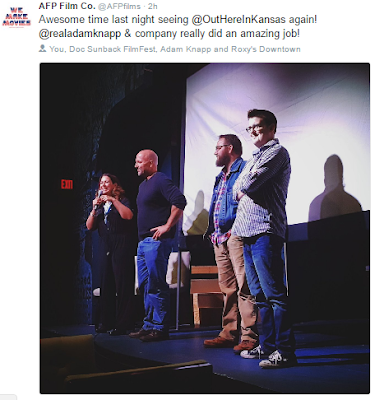 We had an encore screening at Roxy's Downtown last night, an event that was considerably more laid back than our world premiere last month.
Trying to shine a little spotlight on fellow Kansas filmmakers, I asked Doc Sunback Film Festival director Nancy Faber Mottola to be our emcee. We opened things up with a trailer of "Wifi at Rock Bottom," made by our friend Lester Rowe, who won the audience appreciation award at this year's festival.
We then showed the sweet-hearted sci-fi short "Franklin," which won best Kansas film at the inaugural Doc Sunback last year. That was directed by Anthony Bradley and stars Naythan Smith, a talented director himself who was in the audience last night.
So thanks to everyone who came - gosh, we nearly filled up Roxy's again - and especially to those who shared their stories about the meaning "Out Here In Kansas" had for them.
Posted by Unknown at 10:27 AM