Prayers for the Equality House 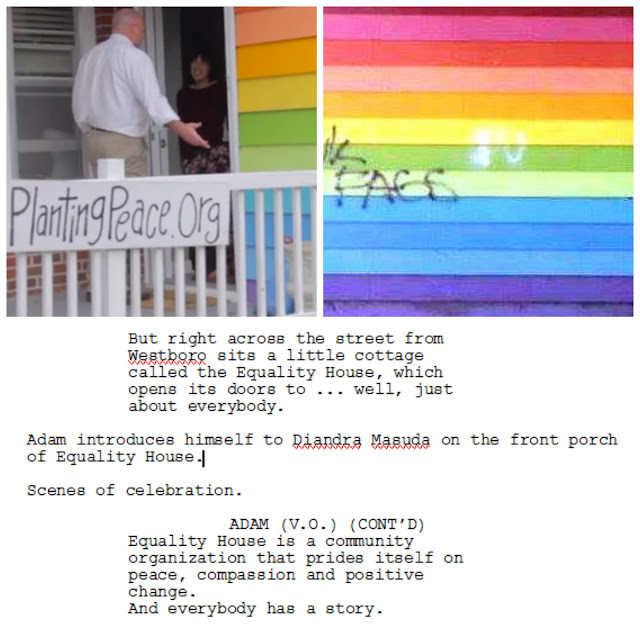 If you've seen "Out Here In Kansas," you'll remember we introduce you to The Equality House, the rainbow-colored cottage directly across the street from Westboro Baptist Church.

I don't mind telling you how sad I am this morning to learn that our friends at Equality House have been the victims of several recent hate crimes. I have heavily cropped the top right photo here, but I think you get the idea.

The president of PlantingPeace.org responded with this message on Facebook ...

Before painting the Equality House, Davis and I thought it would only be three weeks before the house was burnt down.
We even set forth escape plans. But something beautiful happened over the course of the last three years.... Nothing.
With roughly 150 visitors a day, the Equality House had never been attacked.
Then, in late 2016:
- Our Little Free Library was covered in feces.
- The KKK knocked on our door and told Davis and me that we would be killed if Trump were elected.
- Then, a few weeks ago, I was awakened by the sounds of 5 white guys spray painting "f__ fags" along the exterior of my house. They also left 7 bullet holes in my window.
I spoke with the Southern Poverty Law Center after the Equality House was shot, and they confirmed hate crimes are on the rise.
I've seen more swastikas in the last couple of days than I have seen in my lifetime outside of historical references.
But what scares me more than the bullets nailing my window and swastikas popping up on street corners around America is the absolute silence from far too many. This is no time to be complacent my friends. We must act.
"In the end, we will remember not the words of our enemies, but the silence of our friends.”
- Aaron Jackson
President
www.plantingpeace.org