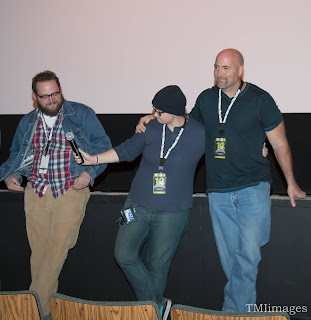 I've used a fair of space on this blog talking about Kenny Linn, our editor and cinematographer, Mostly I've sung his praises, but every once in a while I'll post something about him that I find funny. Like this. Or this. Or this. Or especially this.
But this picture, taken by Melissa Fink at the Kansas International Film Festival a few days ago, makes me smile the biggest.
That's Kenny on the left and producer Savannah Rodgers in the middle. Of the four of us on the team (Jon Pic is not pictured), Savannah probably loves talking the most. Kenny's more of an introvert.
Kenny, bless his heart, has willingly taken part in most of our Q&A sessions. But as you see here, he's never too crazy about being handed the microphone.
Posted by Unknown at 2:59 PM