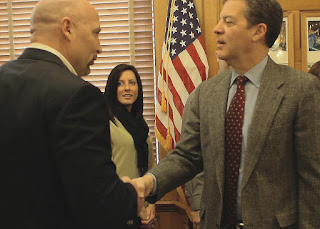 We started September with some great news. Unfortunately, we're ending it with some not-so-great news. It doesn't look like Gov. Sam Brownback is going to be agreeing to an interview for "Out Here In Kansas."
As a journalist who prides himself on being fair, this drives me nuts. Brownback should have a chance to defend himself after being labeled a homophobic by the Kansas City Star, among other media outlets. Our team has been trying since February to get his team warmed up to the idea. (Here's me doing just that earlier this year.)