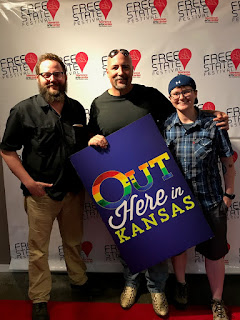 This was a good problem to have, but editor Kenny Linn and I had to made a hard decision last weekend. Do we try to leave Wichita Friday night and make it to Chicago by Saturday morning, when "Out Here In Kansas" was screening at the Windy City Film Festival? Or do we just relax and take in every movie we can at the Free State Film Festival, where it wasn't screening until Sunday night?
We ultimately chose the latter, setting up tent the entire weekend in Lawrence, where we kept the restaurants on Massachusetts Street busy both days (not that they needed our help).
My personal favorite film was "Lane 1974," an eye-opening (and at times, heart-wrenching) story about a 12-year-old girl trying to survive in a hippy lifestyle gone wrong. It was followed closely by the narrative features "The Scent of Rain and Lightning" and "The Tree."
The shorts block was equally outstanding. Our film was the only documentary among the eight shown, and it was the very last movie screened at the festival. We weren't sure if that was a compliment or not, but everyone seemed happy with it. Afterwards we made sure to get this picture with producer Savannah Rodgers, since we don't get too many chances to see her in person these days.
Posted by Unknown at 10:29 AM