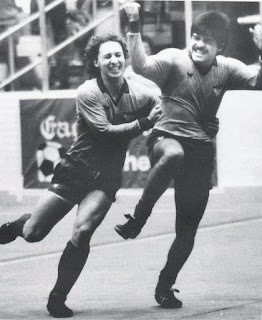 The subject matter won't have much in common with "Out Here In Kansas," but the same film crew has already begun a still-untitled documentary about an indoor soccer team called the Wichita Wings.
This film will focus on the 1980s Wings, who quickly became a pop culture phenomenon in Wichita with their long hair, tan legs and flamboyant personalities. They were mostly European players with large appetites for fun, and they couldn't have come along at a more perfect time.
This will be a bigger project than "Out Here In Kansas." We'll have more photos, more B roll, more history and more interviews (we're already done 12).
But it's safe to say Wichita Wings: The Movie (that's our working title) will have a similar look. I'm sharing the director's role with Kenny Linn. Jon Pic is back as producer. Tim O'Bryhim, who co-wrote a history of the Wings book with Michael Romalis, is also a producer.
You can follow the project on our Facebook fan page, or our Twitter account.