Our evening with Melissa Etheridge 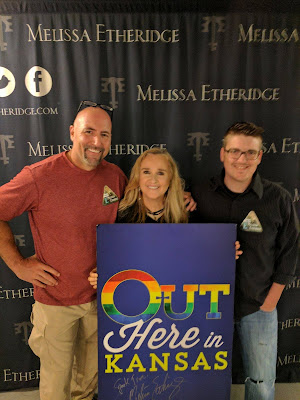 Rock legend Melissa Etheridge performed at the Wichita Orpheum last night. "Out Here In Kansas" producer Jon Pic and I were fortunate enough to meet her backstage before the concert.
Etheridge, for those who haven't seen our documentary, plays a significant part in "Out Here In Kansas." She is from Leavenworth and is practically an icon in the LGBT community, not to mention a brave cancer survivor. (Watch this and tell me it doesn't give you a few goosebumps.)
Melissa called Jon and me "the movie guys" and just couldn't have been nicer. She offered to sign our movie poster (Jon was smart enough to bring a silver Sharpie.) I thanked her over and over again for being a part of our film, and she thanked us "for the important work you're doing."
Jon and I got fifth-row seats to the concert, which was incredible. She played a two-hour set, including an encore, and pretty much blew everyone away with her showy guitar playing and trademark raspy voice. At one point she even took over the drums.
She talked to the audience a lot about growing up in Kansas and her experiences in Wichita - which included church camp, "believe it or not." She sang "Wichita Lineman." She's clearly proud of her home state, even though she's now lived most of her life in Los Angeles.
"Kansas rocks," she told the audience. "Don't you ever say any different."