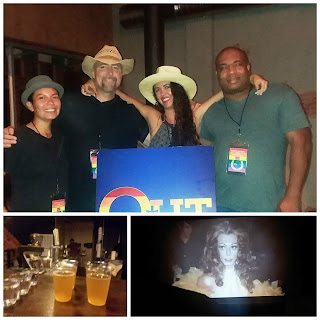 McAlester, Okla., is more than a 500-mile round trip from Wichita, but I had a good reason for driving there Friday: The Glitter! Film Festival, recently featured by NBC News.
The four-film block that included "Out Here In Kansas" had to have been one the best ones. It started with "The Symphony of Silence," a tear-jerking narrative directed by Cedric Thomas Smith (pictured on the far right).
Next up was our film, followed by "Upstairs Inferno," a feature documentary I was well aware of before Glitter! It's the story of a gay club in New Orleans being set on fire, resulting in the murder of 32 people.
The block ended with "Your Way Back to Me," which was directed, shot and edited by first-time filmmaker Alexandra Dietz (second from right). It's a documentary about Native-American Hannah Sheridan (far left), her career as a lesbian in the Navy and her family's way of coping with death.
Posted by Unknown at 3:05 AM