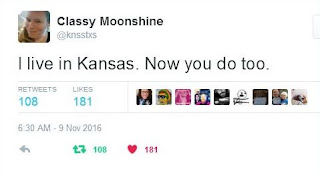 Posted by Unknown at 8:55 PM No comments:

I'm sure we've missed a couple articles, but most of the media coverage surrounding "Out Here In Kansas" has been updated and can be found here.
Posted by Unknown at 1:58 PM No comments:

How I celebrated Kansas Day 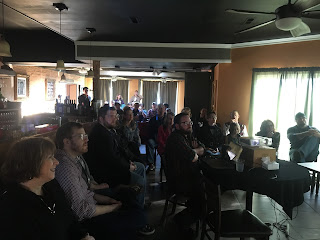 This afternoon, our friends at the Doc Sunback Film Festival had a special event: A screening of Kansas films, made by Kansas filmmakers, shown on Kansas Day.
(That's me on the far right. I love this photo, taken at Luciano's in Mulvane, simply because it contains some of my favorite people.)
It was fun. And hey, let's face it - any January day in Kansas, it's great to just get out of the house.
I hope you do just that in February, where we finally screen our documentary in Butler County here (Feb. 23) and here (Feb. 28).
Posted by Unknown at 9:24 PM No comments:

Kicking off our college spring tour ...

We're excited to announce two screenings for next month at Butler Community College: Thur., Feb. 23 on the El Dorado campus and Tues., Feb. 28 in Andover.
The El Dorado screening will be from 11 a.m.-noon in the Clifford Stone Room of the Hubbard Welcome Center.
The Andover screening will be in the Grizzly Room of its Butler Student Union at 11:30 a.m. Both screenings will be followed by a Q&A.
Although the screenings are geared toward the student population, anyone is welcome to come. You can RSVP for these Facebook events page in El Dorado or Andover.
I'm excited about this. I grew up just down the road from BCC and have had a relationship with the college going back to when I used to attend the Grizzlies' football camp. Much of the documentary was filmed in Butler County, which is also where the subject of the film grew up.
Posted by Unknown at 4:53 PM No comments:

What they're doing in Derby about Westboro 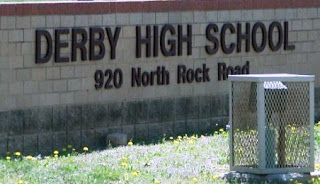 So I really didn't think my first post of 2017 was going to be about Westboro Baptist Church. We spent a few seconds discussing their hate tactics in our documentary, but for the most part I treat them as Kansas' crazy uncle who's better left ignored.
However ...
Westboro has announced it is going to be having an organized protest Friday at Derby High School, where our Editor/DP Kenny Linn teaches broadcast and video production. Note: The protest has been changed to Wednesday because of Friday's forecast for freezing rain.
This news hasn't gotten much of a rise out of Kenny. But a couple of folks have asked to help spread the word about their peaceful counter protests, designed to shield the students from Westboro's nonsense.
Did I say counter protests? There are at least two groups on Facebook putting groups together, Wall Against Westboro and Let's Show Our Love.
Last month, students from Derby made headlines by electing a transgender student as king of its annual Holly Ball.