As I've mentioned on this blog before, when it came to the making of "Out Here In Kansas," we learned to celebrate the milestones.
Having test screenings at a film festival is most definitely a milestone. Bless her heart, my thoughtful friend Christine realized that. She gave me several party poppers for Kenny and I to celebrate with our supporters, then took this cute little video of us doing just that.
Posted by Unknown at 4:44 AM No comments: 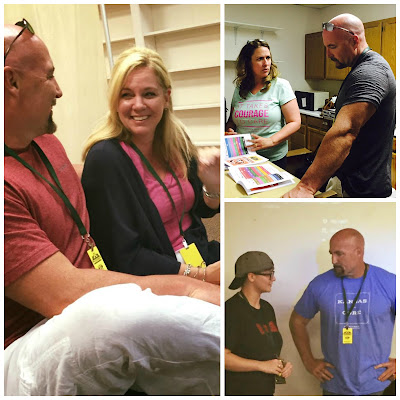 I did not promote this, but "Out Here In Kansas" had a handful of test screenings over the
weekend at the Doc Sunback Film Festival in Mulvane.
The audiences were small, between 10 and 20 people. But one of the screenings included my parents, and it was the first time anyone from my family has seen it. (It also happened to be their 54th wedding anniversary, and they celebrated in style by hitting up the buffet at Mulvane's own Kansas Star Casino.)
For the record, my parents said they loved it and thought I had portrayed both conservative Christians and the LGBT community in a fair light. That was cool, and they're the most supportive parents ever, but it was a little more gratifying to get positive feedback from fellow filmmakers 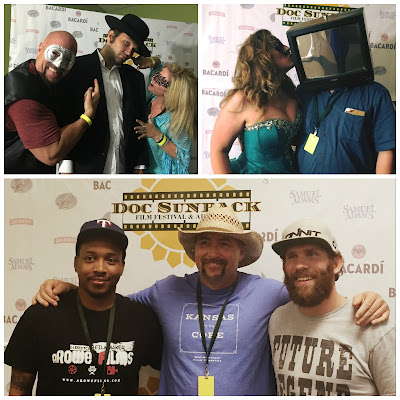 Did I mention I didn't promote these screenings? We really didn't want to get a lot of people excited, since we're hoping to have our true Kansas premiere at the Tallgrass Film Festival this fall. We weren't eligible for awards or anything like that. We still haven't officially submitted to any festivals yet, since we're waiting to switch out a couple of the songs.
But what a blast we had at Doc Sunback. There were a lot of good movies and good folks at the inaugural event last year, but this year was much more of a party. It was good to spend time with Savannah Rodgers, our dynamic young producer, and we even did a couple of Q&As together. She had two of her own films in the festival, as did Lester Rowe, one of our creative advisers.
Editor Kenny Linn was out of town part of the weekend, but made it back just in time for our Saturday night screening and the masquerade ball. (That's him with the television monitor over his head, being kissed by festival director Nancy Farber.)

Posted by Unknown at 1:31 PM No comments: 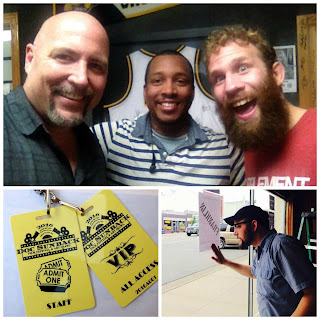 The Doc Sunback Film Festival will be held Thursday through Sunday in downtown Mulvane. If you're a regular reader of this blog, you know I'm a big fan of the festival, which started just last year. Tickets are $2 for a block of short films, and $49 will get you an all-access VIP pass to all the events, including the parties.
I'm especially excited about Doc Sunback this year because of the people who will be there. On Friday, filmmaker Lester Rowe (a creative adviser for Out Here In Kansas, pictured top middle) will be screening his short film "Evolve Or Die," starring MMA fighter David "Caveman" Rickels (top right), who will also be in attendance.
Mulvane native Kenny Linn (bottom right), our editor and DP, will be around and so will OHIK producer Savannah Rodgers.
Posted by Unknown at 1:29 PM No comments:

We have a movie 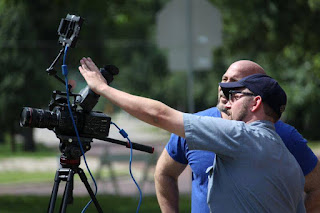 Out Here In Kansas is essentially finished. Kenny and I spent yesterday wrapping it up.
If this post seems understated, it's only because we're not making too big of a deal out of it. There was no celebrating when I left Kenny's house last night. We still need to replace a song or two with original music that is still being composed.
But everything is finally in place to show our half-hour documentary. Next up: A test screening this weekend, followed by our long-awaited entry into the Tallgrass Film Festival.

Posted by Unknown at 9:29 AM No comments:

How Melissa Etheridge responded to Orlando


I'm a couple days late getting to this, but I would be remiss if I didn't mention a new song by our friend Melissa Etheridge.
How new is it? She had it written and produced just a couple days after last weekend's shooting in Orlando, which left 49 dead and 50 injured. The shooting was at a gay nightclub, and Melissa says once the song is available to purchase, proceeds will be donated to an LGBT charity.
The name of her song is "Pulse." It wasn't until this morning that I realized that was also the name of the nightclub.

Matthew Vines weighs in on Orlando 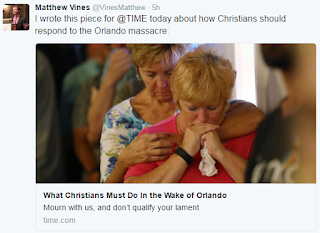 My friend Lauren Seabrook was supposed to start a new television reporting job in Orlando today. Not surprisingly, they needed her yesterday.
As I was updating this blog yesterday, I still hadn't realized the mass shooting at an Orlando nightclub over the weekend was actually a hate crime against gays.

One friend of mine, who is only partially out of the closet, admitted he broke down crying when the news finally sunk in this morning.
I wasn't sure what to say. But I did send him today's TIME Magazine column from Matthew Vines (who is featured in our movie). It's outstanding, and I encourage you to read it, too.
Posted by Unknown at 3:16 PM No comments:

What's stressing me out

Of all the aspects of this film, which would you guess is causing me anxiety? My friends and family hating it? Being sued? Being shot by someone who felt I was spreading the wrong message?
I'm not worried about any of that stuff. I'm laid back, and I just never panic.
But if I forget to thank someone in the closing credits that should be thanked, that's really going to ruin my day.
Posted by Unknown at 11:20 AM No comments: 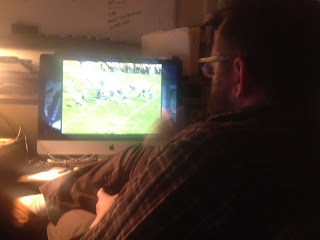 If you know our editor and DP, Kenny Linn, be sure to give him a big "attaboy." He just finished the football section of "Out Here In Kansas," which was by far the most complicated scene in the movie.
I've had a specific vision for this scene for a long time, but at the end of the day, Kenny is the one who had to make it happen. After weeks and weeks of working together on it, I finally got out of his hair and let him do his magic. (You'll know what I mean when you see it.)
So that's it for the footage that made our movie. What's next? I'll be writing about that the next couple of days.
Posted by Unknown at 9:00 AM No comments: