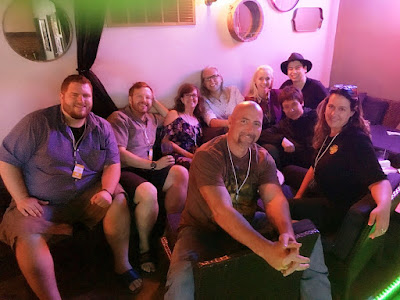 Had the inaugural Wichita Taco Fest not been on Saturday, I probably would have gone (and from the way it sounds, I probably would have been standing in long lines most of the day).
But I was not about to miss my favorite day of the third annual Doc Sunback Film Festival, especially since "Out Here In Kansas" was screening there again. What an amazing event this has evolved into. Once again, I was able to meet filmmakers from all over the country and was able to see independent movies I never would have heard of otherwise.
I got there at noon and started the day with the documentary "Elephants in the Coffee," which was followed by our own screening.
After that was a filmmaker roundtable, which I left early to see the hilarious dark comedy "Mr. Lee." The rest of my evening was spent with blocks of shorts, one of which was outside in the park, the awards ceremony and a righteous after party at Uncle Roy's Tavern.
Because our editor Kenny Linn is a co-founder of Doc Sunback, we made the decision that "Out Here In Kansas" should not be considered for any awards there. Nonetheless, I was so happy for the winners and especially for the organizers of the event. As far as I'm concerned, it's a Kansas filmmaker's dream.
Posted by Unknown at 7:25 PM