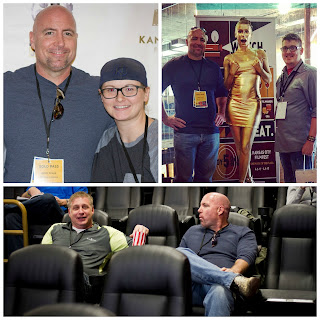 * Our screening led off an 8:30 p.m. block, and proceeded a 90-minute documentary called "Woman On Fire" about the first (and so far, only) transgender firefighter in New York history. What a fascinating movie about a complicated issue. I wish the director, Julie Sokolow, would have been there, but I did reach out to her afterwards.
* There were plenty of other filmmakers there, of course, and it's always great to visit with them. Unfortunately, I had to leave before the screening of "The Grand Illusion," a documentary short about one of the most famous plays in college baseball history - which happened to come at the expense of my friend Phil Stephenson.
* That's me in all three of these photos, with producer Savannah Rodgers (top left), producer Jon Pic (top right) and executive producer John Stephens (bottom left).
Posted by Unknown at 8:35 AM