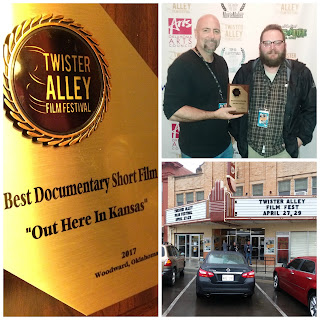 Now this is kind of of cool: In the first-ever film festival awards ceremony we ever attended, videographer Kenneth Linn and I took home the first-place trophy for Best Documentary Short Film last night at the Twister Alley Film Festival.
The film, of course, was "Out Here In Kansas," which screened right after Kenny and I arrived in Woodward, Okla. Saturday afternoon. We spent the rest of the day watching narrative shorts. (My personal favorite was "Doug and Walter" while Kenny's was "American Paradise," and neither of those trailers really do their movies justice.)
It's just as fun to meet the filmmakers themselves, of course, and we certainly did that - directors, producers and actors from Chicago to Austin to Milwaukee to Los Angeles. The festival, started three years ago by Josh Hope of the Windy City Film Festival, was just named one of the Top 50 Film Festival Worth The Entry Fee by MovieMaker Magazine.
Posted by Unknown at 6:52 PM