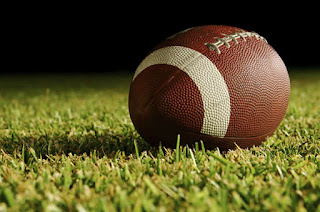 OK, that headline is a bit misleading, although "Out Here In Kansas" does have a heavy football theme. Tonight my girlfriend and I showed it to four girls, ages 16 to 20. (One of them was my daughter, who was surprised to learn she makes a brief appearance in the film.) They all gave me positive feedback, and we spent at least an hour afterward discussing religion, sexuality and the eternal conflict between both.
Their favorite part was the discussion/debate between the two main characters. I was a little surprised to hear that, since it's the one scene with no B roll or action to speak of.
Next week, editor Kenny Linn and I have a private screening scheduled with Pastor Joe Wright, a major figure in our film. I plan on sharing some good news before then. Stay tuned.