Why are Christians fair game?

I was watching the Kansas-Kansas State football game yesterday with a couple of friends. Actually, we weren't really watching. We were talking, and the subject of my movie came up, and that raised the topic of Christianity.
One friend felt guilty because she has occasionally mocked the Christian faith. I am a Christian, and so is the other friend, and we both acknowledged there was times when Christians set themselves up to be mocked. Nobody likes a hypocrite.
As I've stated many times, part of my motivation for making "Out Here In Kansas" is so certain Christians and certain gay people stop tearing each other apart. 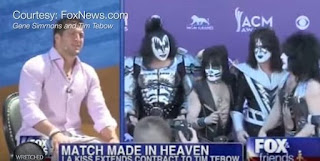 Which brings us to Tim Tebow, the Heisman Trophy winner and former NFL quarterback who proudly wears his Christianity on his sleeve. He's been in the news because apparently his relationship with a former Miss Universe just ended, reportedly because he wouldn't have premarital sex with her. The tabloids are having a field day.
"Tim Tebow still can't find the end zone," announced a New York Daily News headline. Ha, ha.
(There's even been speculation that Tebow might be gay, but I'm not going to touch that one.)
Anyway, I saw this morning that Tebow and his Christian faith are being fiercely defended by - of all people - Gene Simmons, co-founder and bass guitarist of KISS.
To me, this is like Bizarro World. I grew up in a time when KISS was considered public enemy No. 1 by Christian parents everywhere. I've told this story many times, but I wanted to be Gene Simmons for Halloween one year. My mom said no. Neither of us budged. Finally, it started getting dark on Halloween night, so I hastily covered my face in red lipstick, threw a red towel around my neck and announced I was the devil before bolting out the door.
That's right: My mom was happier with me being the devil himself than Gene Simmons.
And now here's Simmons, a Jewish rock star with his own family-friendly arena football team, using his fame to defend a man who believes in Christ his Lord.
The video is just a minute and a half long, and I encourage you to check it out here.