Wrapping things up with Pastor Joe

Since I spent so much time with Burt Humburg earlier this month, I thought it was only right that I get together with Pastor Joe Wright one last time before "Out Here In Kansas" is finished. We visited for an hour and a half yesterday afternoon.
I shared my stories about people close to me who are gay, and he did the same. My only real agenda with Pastor Joe was to again thank him for being such a big part of the documentary ... and to again be crystal clear about what it is about. 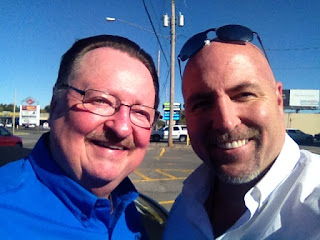 Pastor Joe isn't afraid of any backlash the movie might bring him. This is a man, after all, who has received death threats for his outspoken views against homosexuality. Even though Pastor Joe and I don't agree on some things (like whether or not someone is born gay), there's never been any question that he loves me. I love him, too. Not only was he Burt's pastor, he was mine too. I don't believe Pastor Joe wants gay people to hate him. He simply wants people to go to heaven by accepting Jesus and obeying God's word, which he strongly believes condemns the gay lifestyle.
We talked about Matthew Vines. We talked about Central Christian Academy, where his daughter was a teacher and my kids were students. Then I mentioned a text exchange the other night that was started by my friend, who voiced his concerns that my movie will be biased against conservative Christians. Pastor Joe just laughed, and reminded me that Bible warns against trying to please everyone.
"Anybody with strong feelings going into this is going to think your movie is biased," he said.