I've shown our trailer to just a handful of people so far, and I have to admit I was a little shy about showing it to my own family.
But a few weeks ago, for some reason, I decided to show it to my sister and my sister-in-law. They weren't exactly cheering afterwards. Most of my family is firmly on the conservative Christian side when it comes to gay issues. (All issues, for that matter.) 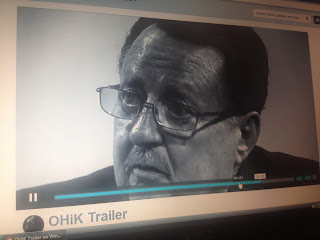 When the trailer was over, my sister broke a couple seconds of awkward silence.
"Who is Burt talking to at the end?" she said. "Is that Pastor Joe?"
Of course it's Pastor Joe, I replied. Wasn't it obvious?
Well, maybe it wasn't obvious enough. Andrea's question nagged at me so much that I raised the issue to my editor Kenny. He agreed it might be worthwhile to show a glimpse of Pastor Joe's face while Burt was making a point during their debate. And that's just what we did. It was easy enough, since there was a camera for each side when we filmed it at KPTS studios.
I'm extremely proud of the trailer, which will be shown three times during the Tallgrass Film Festival on Saturday: 12:15 p.m. at the Wichita Sedgwick County Historical Museum, and 9:15 and 11:30 p.m. at the Orpheum.
Posted by Unknown at 1:18 PM