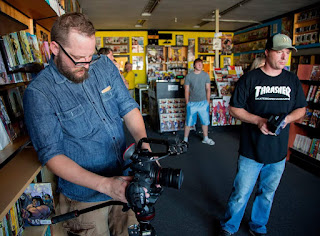 Kenny Linn, our film editor extraordinaire, has spent the last few days in Greensboro, N.C., participating in The 48 Hour Film Project. You can see his team's submission here.
There were 30 teams in North Carolina, and it won't be known until next month where "Hell On Hells" placed. You may recall Kenny was part of the team that won the Tallgrass Film Festival's 24-hour "Down To The Wire" competition last month.
Speaking of North Carolina, our narrator flies in to do his speaking part for us this weekend.