All in good fun? 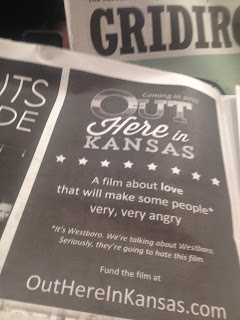 As I've mentioned before on this blog, I'm performing in a production called Wichita Gridiron, which is a comedy show put on by local journalists. It's kind of like a "Saturday Night Live" for Wichita. The best thing about Gridiron is it raises money for local college journalism scholarships. The second-best thing is the show can be a little edgy and risque, and advertisers in the program tend to loosen up. Here's our ad in this year's program, for example.

Truth is, though, Gridiron used to be a lot edgier. I learned that the hard way on opening night yesterday when "50 Shades of Brownback," a skit I wrote parodying the movie "50 Shades of Gray" and in which our governor "seduces" a gay reporter, was censored significantly. Perhaps that's a blog for another day.
Posted by Unknown at 3:56 PM