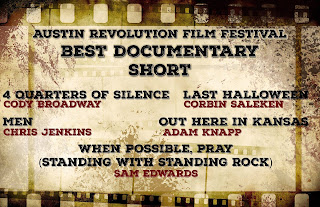 Not only is "Out Here In Kansas" headed to the Austin Revolution Film Festival next month, it's even up for a couple of awards.
One is for Best Documentary Short, which is awesome. Another is for Best Documentary Director, which, as I've alluded to on this blog before, makes me feel pretty undeserving.
Our producer Savannah Rodgers is such a filmmaking machine, I'm not even sure which of her many films have been nominated. But I do know she's up for the Producer Award and Female Filmmaker of the Year.