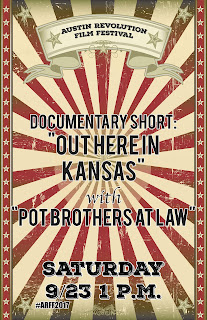 Now this is cool. It wasn't official until this week, but a while back we learned that "Out Here In Kansas" was a shoo-in for the Austin Revolution Film Festival, one of our most prestigious honors to date.
"Out Here in Kansas" will screen 1 p.m. Saturday, Sept. 23 at the festival. (That's 11 weeks from today, by the way.)
We've terribly excited about this one. It's been a month of Sundays since I've been to Austin, but everyone knows its reputation for food, fun and incredible love of the arts. It's been called "the third coast for film making." (It's also one of the fastest-growing cities in the United States.)
But enough about the city. The best part is going to be seeing some film making teams we already know, meeting new people and of course, seeing a ton of independent films.