Another screening in Lawrence 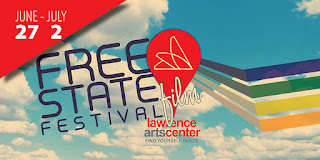 It's no secret that we love Lawrence, Kansas - we did film part of our movie there, after all, and we screened at the University of Kansas earlier this month.
So it was a thrill to learn that "Out Here In Kansas" will be part of the Free State Film Festival this summer. Actually, it looks like we'll be the last movie shown at the festival, which is June 27-July 2 in Lawrence. We're scheduled to end the short films block, which runs 6-8 p.m. Sunday, July 2.
One of the best parts of festivals like these is meeting other filmmakers. At Free State, more so than any other festival in which we've screened, we're also going to be surrounded by people we're comfortable with. Friends of our project Blake Robbins and Patrick Clement have films showing there, as does our producer Savannah Rodgers.