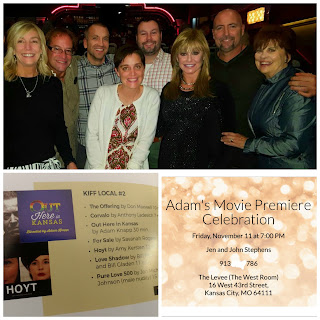 OK, so 2016 is finally almost over. This was a long year (and not just because it was a leap year). It's well documented how it claimed an eye-popping number of some of the most talented artists to ever walk the earth. I think we can also agree most of us survived the nastiest presidential election in history.
Closer to home, Kansas remains stuck in a recession, and it doesn't look like things are going to improve any time soon.
Still, I'm grateful for what 2016 meant for our documentary "Out Here In Kansas."
First of all, we finished the thing, which was no small task.
Second, we've had people support it. Sure, there have been great friends (that's me in the top photo at our world premiere a couple of months ago, posing with some of my beloved cast members of Wichita Gridiron). But strangers have reached out and embraced it, too. We've had so much help from so many people, including some who have disappeared from my life.
Third, I know we've got bigger things coming in 2017. Thanks for keeping up with the project on this blog, and I'll see you on the other side.