Nobody had any, in case you were wondering

Now here's a "Throwback Thursday" for you ... Jon and I having coffee at a hotel on a Saturday morning last summer, going over last-minute details before we officially started shooting our film. 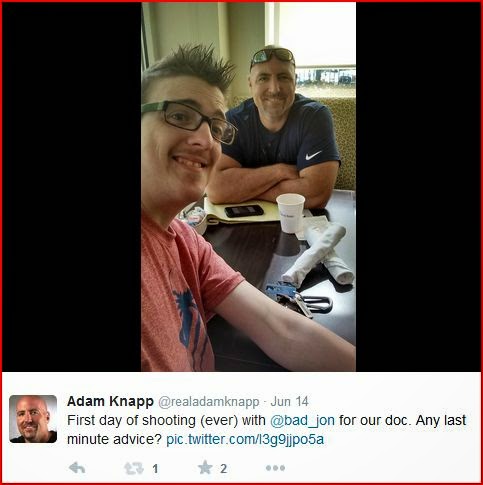 This also happened to fall on my birthday, and it might have been the strangest birthday I've had yet. Burt was deathly ill, so our first interview with him was delayed an hour or so. He wouldn't even tell us what room he was staying in until he'd fixed himself up.
After the shooting, I took Burt out to lunch with my son, a high school senior who wants to go into medicine. He watched Burt phone in his own prescription, and naturally thought that was pretty righteous.
I had all kinds of plans to entertain Burt that night, including a free concert by the Little River Band in Andover Central Park. But all Burt wanted to do was go back to his hotel and sleep. He had no idea it was my birthday.
So I went home and started individually thanking everyone who had wished me happy birthday on Facebook.
That got old after a while, so I decided to go to the concert by myself. While I was there, this girl I went to high school with sent me a Facebook message, saying she would let me kiss her for my birthday. I'd been waiting years to hear that, and she just happened to live in Andover, so I drove to her house and took her up on it. And then I went back home.
Posted by Unknown at 8:58 AM