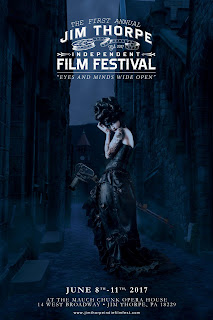 So far "Out Here In Kansas" has been accepted into film festivals in Colorado, Oklahoma, Texas, Missouri and of course Kansas, but nothing east of the Mississippi River.
That changed earlier this week, when we learned our documentary will screen next month at the inaugural Jim Thorpe Film Festival.
The documentary will be shown 9:30 p.m. Friday, June 9 at the historical Mauch Chunk Opera House in Jim Thorpe, Pa.
Jim Thorpe is a gorgeous Victorian town that consistently pops up on the national media's "best of" lists. It's 90 minutes north of Philadelphia and two hours west of New York City.
And yes, the town is named after that Jim Thorpe, who is buried there. As I took delight in telling my non-sports-inclined team, Jim Thorpe is considered by many to be the greatest athlete of the 20th Century.