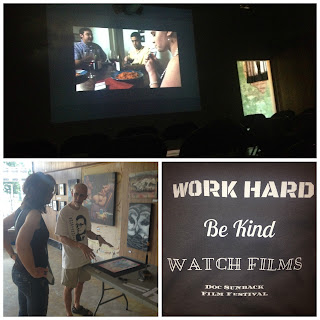 Here are a few pictures I took from the inaugural Doc Sunback Film Festival, including the creators of "Franklin," picking up their award for Best Kansas Film.
I really meant to take more photos, but I guess I got so caught up in watching movies and meeting new friends that I forgot. My personal favorites were "Pokey Pokey" (a creepy animated short), "Franklin," ""Killshot," "Elevator," "The Unveiling," "Mount Lawrence" and "Politically Correct." I'm sure I'm forgetting a few. I had an all-access pass and I watched a lot of films. 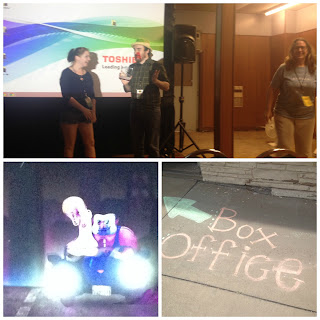 Actually, the biggest thrill was probably visiting with the creator of "Politically Correct," a University of Kansas student named Savannah Rodgers. Her short was hilarious, as I somehow knew it would be, given the subject matter. I'm always inspired by meeting fellow filmmakers, and Savannah is a dynamo. We even talked about working together in the near future.
Finally, I really have to give it up for downtown Mulvane and the festival's organizers. They took great pride in their event, and I can't wait to return next year.